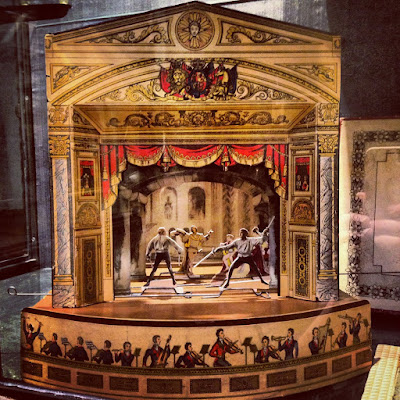 I've written before about the games we played outside when I was a child; today I'm remembering the things that kept us amused when the weather was too bad to play outdoors. And my very favourite toy is pictured above. My precious Pollock's Theatre. Mine was very like this one, made of wood with printed paper depicting the curtains, orchestra and so on pasted on. There were slats just like the batons on a real stage to insert cardboard scenery and also stage dressing that protruded from the wings. The script of the play to be produced was in a printed booklet, and included push-out cardboard characters as well as the scenery and props, and there were wires that the actors could be attached to in order to move them about on stage. Oh, how I loved that theatre! I played with it endlessly. I really wish I still had it, but unfortunately after I left home it was consigned to the garden shed along with other toys and dolls, and when I found it years later the wood had rotted, the cardboard curled and faded and the paper had been nibbled by mice. Thinking about it now I'm tempted to buy one from the Pollock's Museum in Covent Garden and display it in my living room. Though I don't see myself having the patience to push the actors on and off stage!

'Dolly Dressmaking Books' were another favourite. They were still about when my own daughters were children, but nothing like the ones we used to enjoy. I think the card dolls on the front and back covers were push-out, but we had to cut out all the dresses ourselves with little scissors, and I particularly liked the ones that had to be cut out from squares of paper 'fabric' using template patterns. We had stencils made of waxed card and a small, flat topped hard brush to dab the paint through the holes of the pattern, and transfers that had to be soaked in a saucer of water and then pressed onto whatever we were decorating. There were jigsaws, painting and colouring books, and magic painting books. Our mother kept a little stock in the bottom of her wardrobe for rainy days when my sister and I were bored, and would fetch us one each down - we didn't get to choose, but the surprise was part of the fun. But why, oh why, did our friends' painting books seem more exciting? I remember loving it when Lynette, who lived near us, let me bring one of hers home to colour in a few pictures before letting her have it back again. Incidentally, we always loved playing at Lynette's, because she had a fairy cycle (though I couldn't ride it I could push myself along the wall of their house on it) and a swing in an apple tree in her garden. But I digress.

When I was only five years old and recovering from a really bad case of whooping cough I drew, coloured and cut out a bride and groom, bridesmaids and dozens of guests which I wanted pasted as a frieze round my bedroom. I discovered that if I rested the paper on a book while using coloured pencils I could get the imprint of the book cover through to produce a different patterned fabric for each of my characters - all the book covers had a slightly different weave. You couldn't do that today with glossy covers! A little later at about age seven I invented an alter ego, and spent many happy hours drawing pictures of her and inventing adventures. She was called Pamela Garrett and she was a Wren Waaf, because I couldn't decide between the Navy and the Air Force - this was, just after the war - and I gave her a smart uniform combining the two, though I think it veered more towards the Wrens than the WAAF.

My mother ran a Kays catalogue, and I loved cutting out the 'ladies' - the clothes models. At the time the Bath Evening Chronical ran an annual beauty queen contest, with half-a-dozen or so photographs of entrants published each evening. I collected these faithfully, chose which ones to paint, and would lay the whole lot out in rows on my bed, deciding which ones would be the finalists and winner. My little sister used to pester me for some of them and I was very upset when my mother decreed that I should let her have some - it was really important to me that I had the whole set. I remember to this day that one of them was called Sunny McGarry. If anyone reading this knows of a Sunny McGarry who would have been in her late teens or early twenties in those days I'd love to hear from them! Incidentally, my sister used to take my 'catalogue ladies' too, more to annoy me than because she wanted them .....

Each week when we went to market we were allowed a 'Saturday Treat' instead of pocket money. We could each choose a small toy from the Swifts, the paper shop, when she paid the paper bill. Sometimes it would be a new little animal for our farm, a lamb or a duck perhaps, sometimes a windmill or a kaleidoscope and once it was a plastic viewer which you slotted film into and pulled through. We also had an ice-cream from Mr Paniccia, who parked his van outside the market. I have a feeling we also had our first bubble tubs as a Saturday treat. Until then we used to blow bubbles from a lay bubble pipe dipped in soapy water.

We really were very good at entertaining ourselves in those long ago days. No TV or computer games, only the wireless, which ran on what my father called 'an accumulator' that needed charging from time to time - Listen With Mother at 2 pm and Children's Hour at teatime. It all comes back to me so clearly as I write it might have been just yesterday, those happy, happy days of my early childhood.
Posted by Rich Spence at 08:18