AN EXPLANATION AND APOLOGY 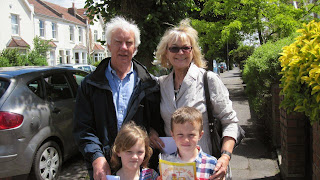 In happy times .... last year.
You may have seen an apology on my web site for the fact that I haven't been blogging over recent months - 'due to illness in the family', as I put it.
The stark truth was that my darling husband, Terry (pictured above with me and our youngest grandchildren, Dan and Amelia, was suffering from a devastating form of T-cell lymphoma which was diagnosed in January.
Though the prognosis was not good, he underwent a number of sessions of intensive chemotherapy, but unfortunately the disease was too aggressive.  By April it was apparent the treatment was not working.
After a spell in hospital I was able to bring him home, where he wanted to be, and looked after him for 3 weeks until the end came, on May 25th.
I still find it difficult to believe my fit, healthy, strong husband is gone - it all happened over such  short period of time.
Now, however, it is my intention to continue with my series of blogs about my life as a 'Real-life Heartbeat Police Wife'.    I'm very glad I began it ...  and as I write it will recall for me the happy years Terry and I spent together.
Posted by Rich Spence at 04:52

Email ThisBlogThis!Share to TwitterShare to FacebookShare to Pinterest
Posted by Rich Spence at 04:52