MY DAD, MY HERO 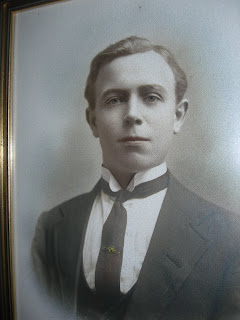 I mentioned in my last blog, RETURN OF THE BLACK MOUNTAINS, that the book (out in e-format on 1st November) was based around stories my father told me about life 'in the old days', but I think he deserves a page all to himself!

His name was Gerald Young, just Gerald - his poor mother had probably run out of inspiration by the time he came along, one of the youngest in a family of thirteen. His father was a miner, and the older boys had followed him into the pits of the Somerset coalfield; Dad was to do the same at the tender age of twelve.

I should explain here that he was almost fifty by the time I was born, and the early part of his life was a very different world to the one I knew. The school leaving age at the time was 13, but because Dad was clever enough to pass the 'knowledge test' at twelve, he was allowed to leave a year early. He went to work first on 'the screens', sorting coal above ground, but before long he was underground, working as a 'carting boy'. The Somerset coal seams were notoriously narrow and faulted, too low to accommodate pit ponies, so men and boys had to do it, crawling on hands and knees and dragging a 'putt' of mined coal from the coal face to a place where the roof was higher. A rope around their waist, then threaded between their legs, was attached to the 'putt'. It was hard, demeaning toil, and the rope rubbed their skin raw until they became used to it. But for all the infamy of the 'gus and crook' as the apparatus was known, I never heard my father complain about it. 'It's just the way it was, my dear,' he used to say.

What had made him angry was that he was blackmailed into continuing with the job until he was twenty-four years old. He 'carted' for his father, and carting boys were much harder to come by than colliers, so that when he wanted to leave he was told: 'If you go, you can take your father with you.' And so he stayed: he couldn't be responsible for his father losing his livelihood.

That story is one of the many that found its way into THE BLACK MOUNTAINS, along with the dreadful accident that nearly cost him his life. One day, taking his putt of coal down a steep incline, he misjudged the 'sprag' , a peg which was thrust between the spokes of the wheel as a way of braking. The putt ran down the incline, dragging him behind it, and at the bottom he was catapulted in an arc, taking all the skin off his back as he grazed the stone roof above. In those days injured miners were taken home by one of the carts that were waiting at the pit head to be loaded; that day there were no carts waiting, and Dad's brother carried him home on his back - a journey of the best part of a mile up a very steep hill. A story like that is better than any I could have invented!

Then there was the accident that happened to his little sister, Eva, who tumbled into a bath of scalding water. Lucky to escape death, she lay on her stomach for six months whilst her terrible injuries slowly healed, and had to be taught to walk again.

And more, so much more ... I think it will warrant another instalment ...

Though I used my father's family as 'pegs' for the characters in THE BLACK MOUNTAINS, and though Hillsbridge is a thinly disguised Radstock, the story is completely fictional, as I am always at pains to point out to readers who think they can spot the real villains. ( 'We all know who that was, don't we?' ....)

But one more incident is completely true. When my father escaped the mines he travelled the country, doing all kinds of different jobs. Whilst he was working as a deck chair attendant on the beach at Ramsgate, a local boy of 13 got into trouble whilst swimming - the currents were notoriously dangerous. Four men, including Dad and a lifeguard, went into the water to attempt to save him - one man drowned in the attempt, two were forced back - and my Dad got the boy safely to shore. He had never learned life-saving; he brought the boy in by his hair. For this he was awarded the Carnegie Hero's Fund Trust Award, a citation which hangs on my wall today, and £10 - a lot of money at the time! So you see, my dad really was a hero.

Unfortunately he died before THE BLACK MOUNTAINS was published, but he carried the piece of paper in his wallet on which I had written the dedication, and I'm sure he was pleased and proud. The dedication is this:

For my Father, Gerald Young

Who was a carting boy in the pits of the Somerset Coalfield for ten years and a collier in Somerset and South Wales for several more.

The stories he told me inspired this book. The plot and characters are fictional, but the way of life is as he described it to me, and I believe that he, and others like him, helped to write 'Black Mountains' with their lives.