Whew! I can hardly believe I've just completed the fifth book in my Families of Fairley Terrace series (under my pen name of Jennie Felton). I was just putting the finishing touches to it when the fourth came out in hardback and as an e-book, the story of a young widow struggling to keep her family together after the tragic death of her husband. I do hope you enjoy reading it as much as I enjoyed writing it! 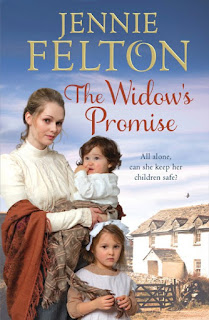 When I began the series with All The Dark Secrets I never for one moment imagined that it would become a series of five. I knew I was 'mining a rich seam', as it were, (no pun intended!) with the starting point of the terrible colliery disaster that actually happened, and twelve men and boys met a horrific end when the hudge - an early form of cage - crashed into the depths of the earth when the rope controlling it snapped. (See my blog of 16th October 2014 for a full account of the tragedy). But I little realised how I would be drawn in to the lives of the families who lived in a rank of miners' cottages and were all affected in one way or another by the dreadful events of that day. Maggie, the central character in ALL THE DARK SECRETS, lost both her father and her fiance, Jack, in the accident, and would eventually learn a terrible secret kept by her brother, Billy, as to the cause of what had happened.

THE MINER'S DAUGHTER tells the story of Lucy Day, just a little girl when her father died in the accident. Her life was changed forever when her mother was forced to marry an evil local preacher, but she went on to find fame as a singer in the music halls and happiness with her childhood sweetheart.

Although Edie Cooper, the heroine of THE GIRL BELOW STAIRS, was not directly affected by the tragedy, the love of her life, Charlie Oglethorpe most certainly was. As a young lad he was the one to run back to Fairley Terrace with the terrible news that the hudge had gone down,and the experience had haunted him and coloured the way he had lived his life for many years to come.

Carina is the central character in THE WIDOW'S PROMISE. It was because of what had happened at the pit that her family moved away from Fairley Terrace, and the narrow faulted seams of the Somerset coalfield, to live in South Wales. But when visiting her aunt, Hester Dallimore, the gossip-monger of Fairley Terrace, she falls in love with a local lad, marries him, and comes back to Somerset. The couple have two children, and live happily on Robert's family farm but tragedy strikes, and Carina is forced to carry on alone and responsible not only for the two little ones, but also Robert's ageing grandfather and his wild and wilful sister.

In the fifth book, which I have just finished, we meet a new family, who moved into the house left vacant when Carina's family moved to South Wales, and the story follows the two Sykes girls, Laurel and Rowan. Their mother, Minty, is obsessed with respectability and keeping herself to herself, never enjoying the easy friendships that characterise the women of Fairley Terrace, but unbeknown to them, there is a very large skeleton hiding in her cupboard. However, all the people from the previous four books had become like old friends to me, and I've been delighted to be able to revisit some of them and discover what happened to them after their own particular chapter was closed. I've suggested this book should be called THE SISTER'S SECRET, though the lovely folk at Headline may have other ideas!

I learned so much through researching these five books. First, in ALL THE DARK SECRETS, I discovered how stained glass windows are made, courtesy of a dear friend, Richard Jones, who had sadly left us before the book was published. His father had made a stained glass window for a cathedral in New York, just as Lawrence did in the book, and Richard had taken it up as a hobby, turning a shed in his garden into a workshop, or den, as he liked to call it. He showed me all the tools and the kiln and even loaned me a very precious old manual which had belonged to his father which explained the process in detail. Bless you, Richard. And the beautiful plate panel you made for us still has pride of place in my home.

For THE MINER'S DAUGHTER I was delighted to dig into reams of research material about the wonderful world of the old time Music Hall. A particular passion of mine. For THE GIRL BELOW STAIRS I learned a great deal about the Suffragettes. For the farm in THE WIDOW'S PROMISE I had only to cast my mind back to when I was a little girl - horses still pulled the wagons for haymaking and so on - and I realised that during the first half of the 20th century change, for most ordinary folk, was slow in coming.

The most fascinating aspect of my research for the fifth book was the old travelling fairs, and Romany culture.

I'm not sure where my next book will lead me, but i'm already turning over ideas. It may be a stand alone, or it may be the first of a new series telling of the lives of another community that I hope will become another group of friends.. But whatever, it will certainly be set in the Somerset countryside where I grew up, and which I love,

I hope you will enjoy reading them as much as I enjoyed writing them!
Posted by Rich Spence at 14:01